ABSTRACT
Cervical cancer is one of the most common cancers in women living in developing countries. Due to a lack of affordable effective therapy, research into alternative anticancer compounds with low toxicity such as dietary polyphenols has continued. Our aim is to determine whether two structurally similar plant polyphenols, resveratrol and pterostilbene, exhibit anticancer and anti-HPV (Human papillomavirus) activity against cervical cancer cells. To determine anticancer activity, extensive in vitro analyses were performed. Anti-HPV activity, through measuring E6 protein levels, subsequent downstream p53 effects, and caspase-3 activation, were studied to understand a possible mechanism of action. Both polyphenols are effective agents in targeting cervical cancer cells, having low IC50 values in the µM range. They decrease clonogenic survival, reduce cell migration, arrest cells at the S-phase, and reduce the number of mitotic cells. These findings were significant, with pterostilbene often being more effective than resveratrol. Resveratrol and to a greater extent pterostilbene downregulates the HPV oncoprotein E6, induces caspase-3 activation, and upregulates p53 protein levels. Results point to a mechanism that may involve the downregulation of the HPV E6 oncoprotein, activation of apoptotic pathways, and re-establishment of functional p53 protein, with pterostilbene showing greater efficacy than resveratrol. 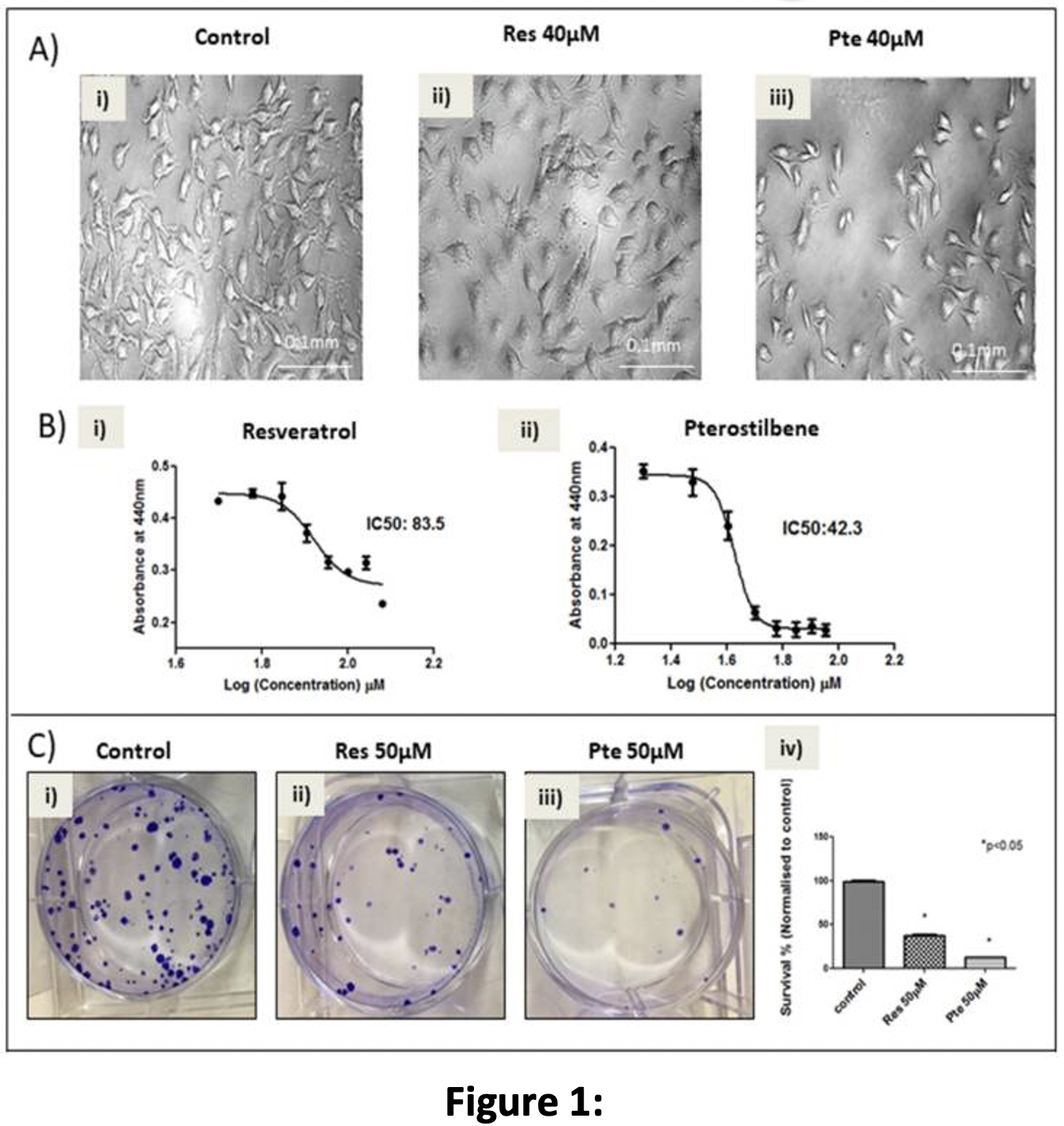 Figure 1: Pterostilbene is more potent in eliminating HeLa cervical cancer cells as compared to resveratrol: (A) Brightfield analysis of HeLa cells untreated (Ai) or treated for 24 h with 40 µM of resveratrol (Res; Aii) or 40 µM of pterostilbene (Pte; Aiii). Evidence of cell elimination was only seen robustly in cells treated with pterostilbene at 40 µM. (B) Analysis of IC50 values, generated by a Tetrazolium salt-1 (WST-1) assay after 24 h of exposure to resveratrol or pterostilbene indicates that pterostilbene (IC50 = 42.3 µM) is a more potent cytotoxic agent than resveratrol (IC50 = 83.5 µM; Bii). The graphs represent data from three independent experiments (mean ± S.E.M. (Standard error mean)). (C) Clonogenic assays performed to compare the relative effect of the two polyphenols on the clonogenicity of HeLa cells untreated (Ci) or treated with 50 µM of either resveratrol (Cii) or pterostilbene (). Results are from 15-days post-treatment and indicate that pterostilbene is more efficient in curbing the clonogenicity compared to resveratrol (Civ). graph represents data from three independent experiments (mean ± S.E.M.; * p < 0.05; Civ).

Live of cells treated with 60 µM of pterostilbene (S3).

Of the two compounds, pterostilbene showed significantly more death and characteristic apoptotic blebbing with cells than when compared to untreated or resveratrol-treated cells. 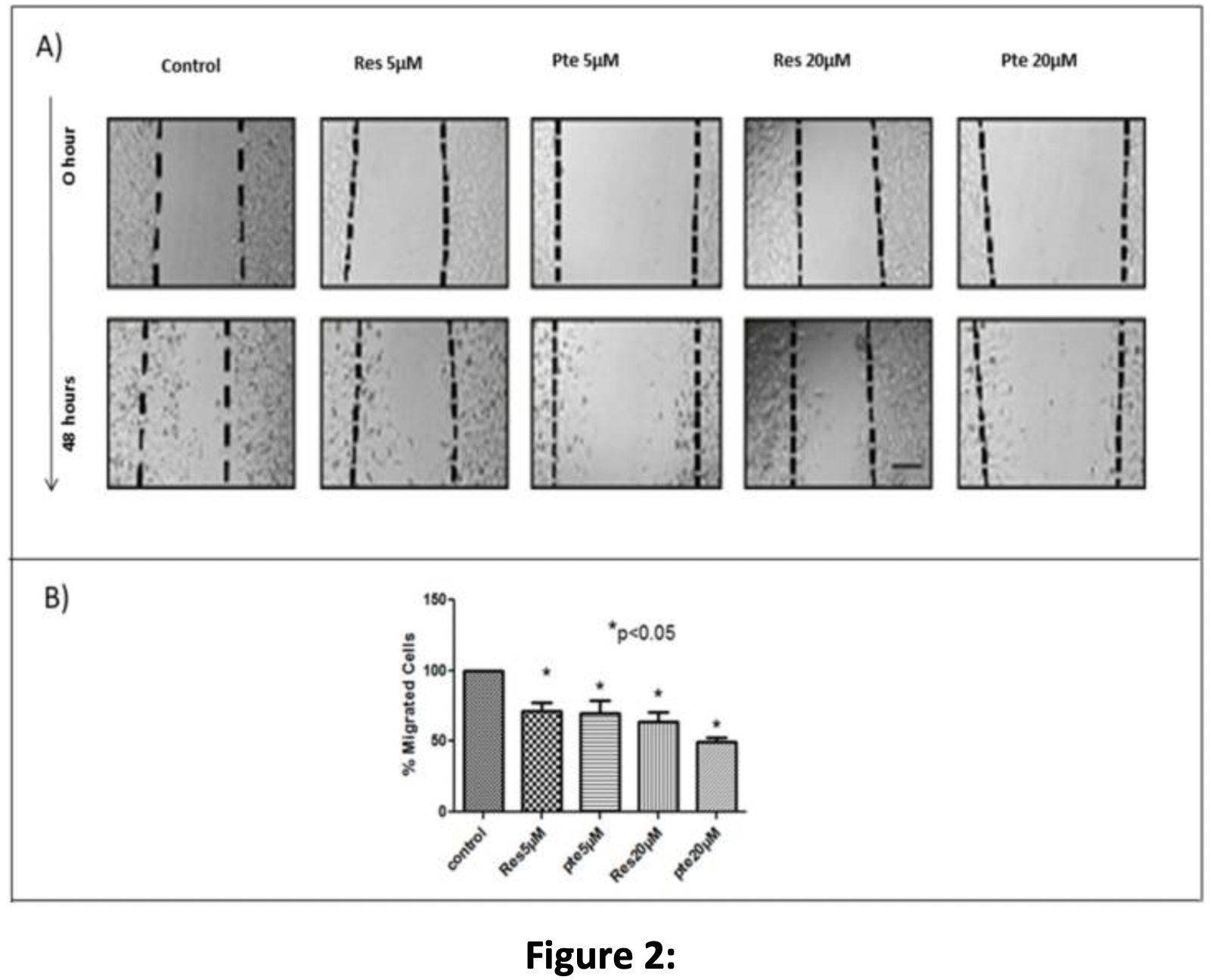 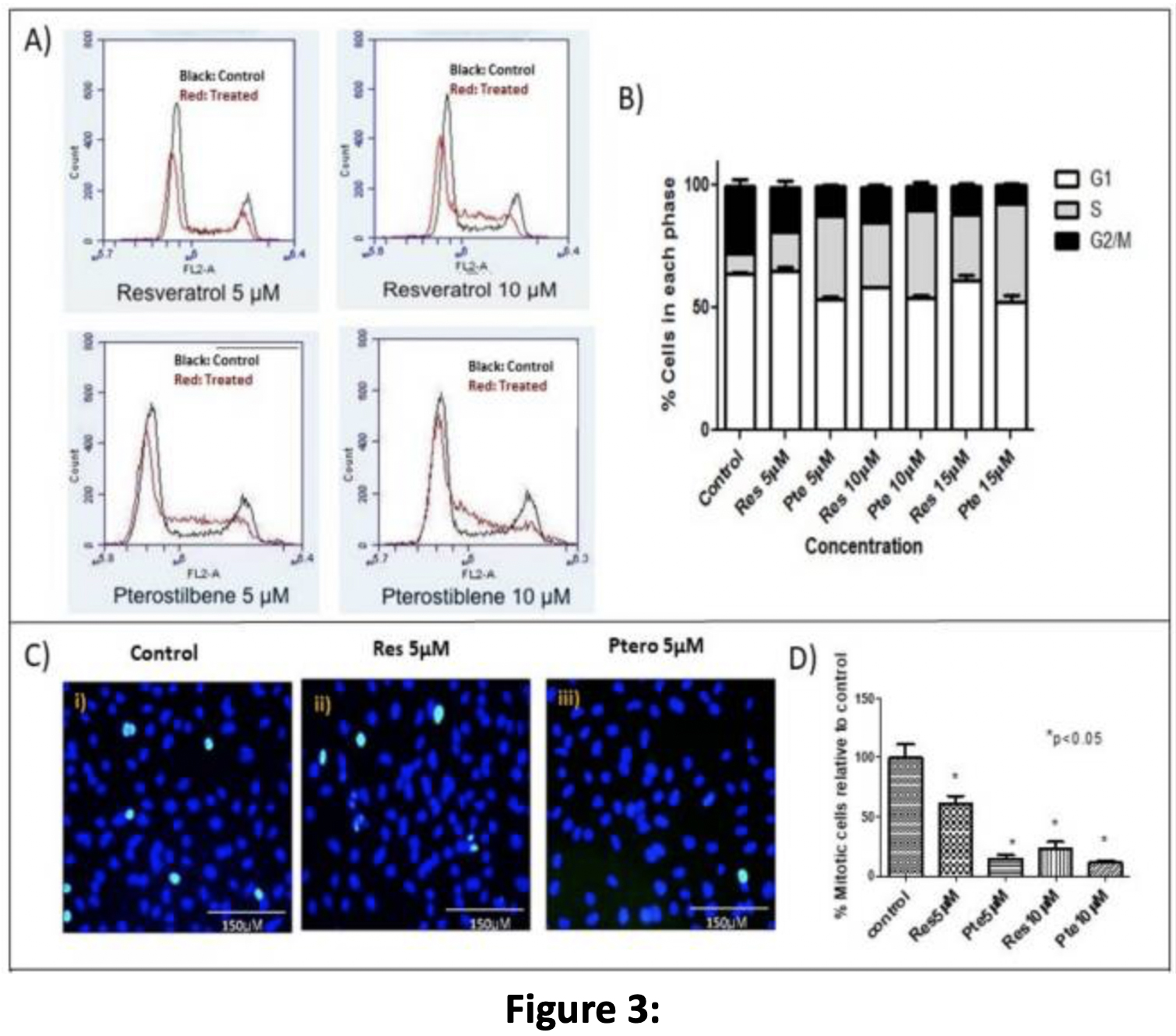 In order to compare the effect of sub-lethal doses of either resveratrol or pterostilbene on the cell cycle of HeLa cells, treatment was carried out with three different concentrations (5 µM, 10 µM, and 15 µM) of the two compounds for 18 h prior to flow cytometric analysis (Figure 3A). Flow cytometry analysis showed that the cells treated with either compound exhibited a significant decrease in the number of cells in the G2-M phase with respect to the control cells (p < 0.05) (Figure 3A, Table 1), indicating an S-phase cell cycle arrest. This effect corresponded with an increase in the number of cells arrested at the S-phase. Pterostilbene was significantly more potent than resveratrol in inhibiting cell cycle progression, showing effects at concentrations as low as 5 µM (p < 0.05) (Figure 3A, Table 1). At this concentration, pterostilbene had these percentages of cells in each phase: G1 = 53.4 ± 1.4, S = 34 ± 1.4, G2 =12.5 ± 0.2, while resveratrol had values of G1 = 64.8 ± 2.0, S = 16.3 ± 1.0, G2 = 18.3 ± 2.3. At a higher concentration (15 µM) both compounds significantly inhibited cells from entering into G2-M by arresting them in the S-phase, and between the extent of the arrest at this phase induced by the two compounds was significant (p < 0.05) (Figure 3A, Table 1).

Figure 3: S-phase arrest in HeLa cells treated with low concentrations of resveratrol and pterostilbene: (A) Flow-cytometric evaluation of HeLa cells untreated or treated with sub-lethal doses of resveratrol (Res) and pterostilbene (Pte) for 18 h. Treated cells exhibited S-phase arrest and a subsequent decrease in the number of cells in G2/M. Pterostilbene was a more potent compound than resveratrol, showing a capacity to arrest cells at the S-phase at concentrations as low as 5 µM. (B) Graphical representation of the dose-dependent cell cycle effects induced by resveratrol and pterostilbene at three different concentrations (5 µM, 10 µM, and 15 µM). (B) The graph represents data from triplicate sample experiments normalized to the control (mean % cells in each phase ± S.E.M.) (C) Immunofluorescent images of HeLa cells probed for the M-phase marker -histone-H3 (serine10). HeLa cells were untreated or treated with 5 µM and 10 µM of resveratrol or pterostilbene. Immunofluorescent images display a decrease of histone-H3 in cells treated with both the compounds, the effects at 5 µM of pterostilbene is much greater than those of resveratrol (at 5 µM). (D) Graphical representation of the percent of mitotic cells calculated from immunofluorescent images that resveratrol and to a greater extent pterostilbene are effective in decreasing the number of mitotic HeLa cells. The graph represents data from experiments obtained from triplicate samples normalized to the control (mean % mitotic cells ± S.E.M.;* p < 0.05). 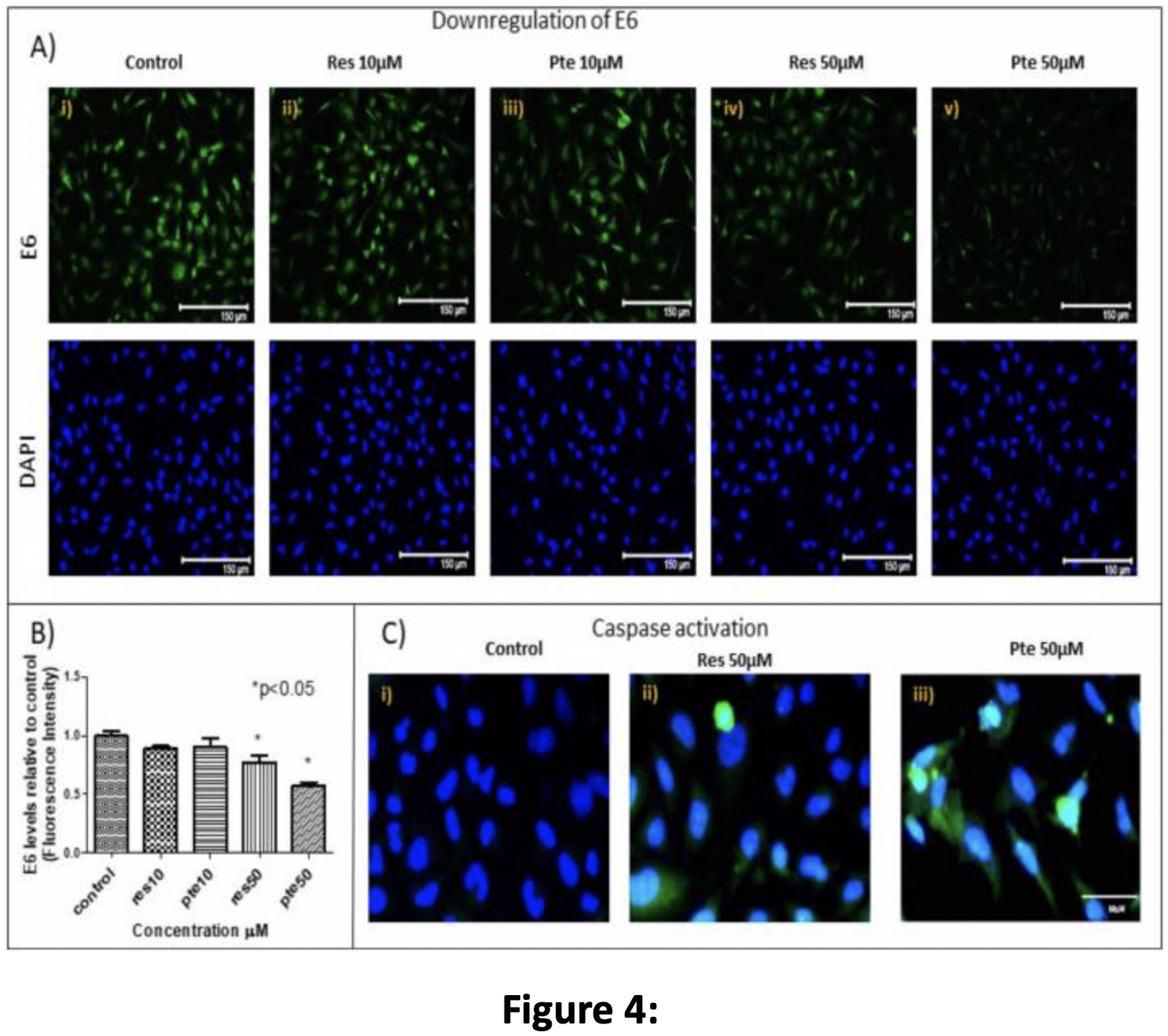 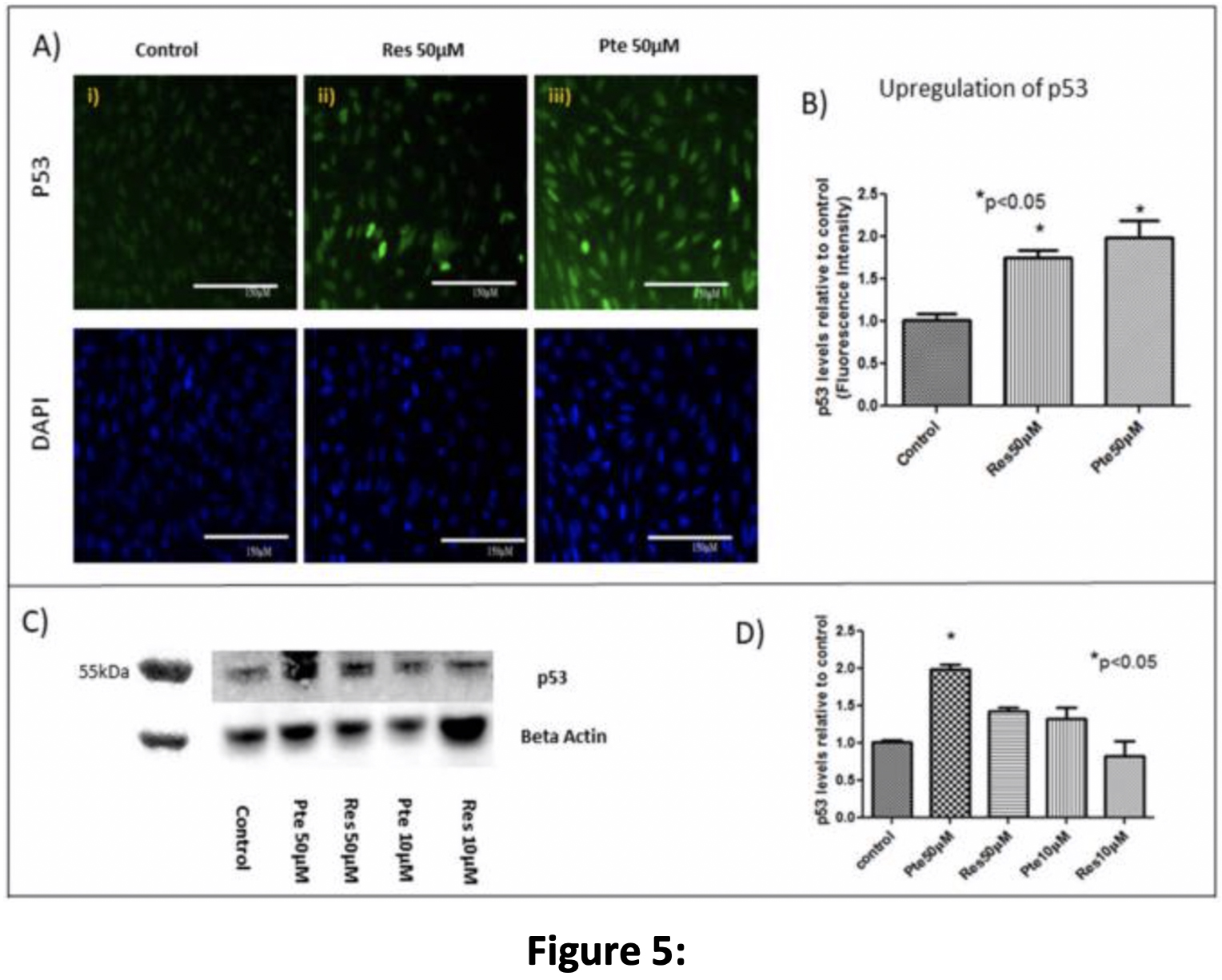 Concomitant with E6 suppression, 50 µM pterostilbene treatment for 22 h caused an upregulation of p53 in HeLa cells (Figure 5A). When compared to the control, pterostilbene treatment elicited a 2-fold increase in p53 levels (staining normalized to DAPI; Figure 5B; p < 0.05). In comparison to the control, HeLa cells treated with 50 µM of resveratrol also caused an upregulation of p53 (1.75-fold increase; Figure 5A,B; p < 0.05) at 22 h.

Here, we show that pterostilbene potently suppresses HPV E6 expression (Figure 4) and efficiently eliminates HPV+ cells in culture by p53-mediated apoptosis (Figure 1 and Figure 5) while suppressing cell proliferation (Figure 3) and migration (Figure 2). We find that pterostilbene is a more promising agent against cervical cancer when compared to resveratrol. Based on such properties, the use of pterostilbene presents a relatively economical but highly hopeful therapeutic approach to treat HPV infections and cervical cancers. Our future studies will include signaling studies using HPV+ murine tumor models to confirm these observations in vivo.