Institutional Review Board (IRB) clearance to initiate a pilot pharmacokinetic trial of “NanoStilbene” was initiated and in July 2018 the Company received pilot clinical data providing proof of concept that NanoStilbene more effectively increases blood levels of the molecule as compared to conventional powder formulations.

The clinical trial involved the administration of NanoStilbene in comparison to powder in capsule form pterostilbene with healthy volunteers, who underwent a series of blood draws to determine the concentration of the compound.

Blood was collected in EDTA tubes and plasma collected subsequent to centrifugation at 700g for 10 minutes.  Collection time points were prior to administration of test compound, as well as at times 2hr, 4hr, 6hr, 8hr, 10hr, and 12 hrs.  Test compounds were 10 ml of NanoStilbene (provided by Therapeutic Solutions International) and 6 capsules of 50 mg pterostilbene ().  A period of 3 days was allowed between two test compound administration. 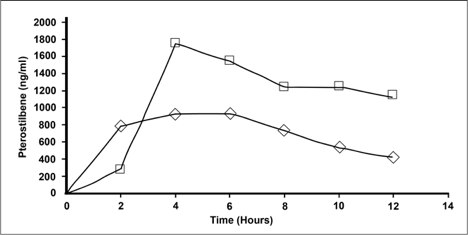 The results were that at peak concentration NanoStilbene (Square) had a 55% increase in serum levels over the traditional powder (Triangle) form of pterostilbene. The data also shows the half-life to be double to that of the powder form.

The data in Granted U.S. Patent No.: 9,682,047 strongly suggest that pterostilbene administration may be an inexpensive and safe method of augmenting the efficacy of numerous immunotherapeutic drugs. Although cancer immunotherapy has revolutionized the prognosis of many patients, the majority of patients still possess poor or suboptimal responses to this approach.

Plasma levels of pterostilbene was measured using a tandem mass spectrometer (API 3000; Applied Biosystems/MDS Sciex, Foster City, CA) equipped with a high performance liquid chromatograph (Agilent 1200; Agilent Technologies, Wilmington, DE). For pterostilbene determination, a 100 μL aliquot of plasma was mixed with 1 mL of acetonitrile (ACN; Sigma–Aldrich, St. Louis, MO). After vortex mixing for 1 min, the sample was centrifuged at 7,000 RPM at 4°C for 10 min to remove precipitated proteins; the supernatant was transferred to a clean tube and dried under nitrogen at room temperature (approximately 25°C). After the evaporation was completed, the residue was reconstituted in 100 μL of methanol with 5 min of sonication, added to 400 μL of water, vortex mixed, and centrifuged again. The resulting supernatant was transferred to a sample vial for instrumental analysis. All sample preparations were conducted under yellow light and using opaque plastic ware to avoid light exposure of the agent.

Freshly prepared pterostilbene standard curves were analyzed along with samples on each day of analysis. Instrument calibrators and quality control (QC) samples were prepared by adding 10 μL of a stock pterostilbene solution (in a methanol/water mixture [v/v 50:50] to 100 μL of rat plasma (Bioreclamation Inc., Westbury, NY). Target calibrator concentrations were 5, 10, 20, 50, 100, 200, 500, and 1,000 ng/mL. QC samples were prepared at approximately 12, 400, and 800 ng/mL. Calibrators and QC samples were processed for analysis using the procedure described earlier. The concentration of conjugated metabolites for both agents was estimated using the calibration curve for each parent compound.

Chromatography was performed using a Luna 3μC18, 30 × 2.0 mm column (Phenomenex, Torrance, CA) maintained at a temperature of 25°C. A flow rate of 0.25 mL/min was used. Mobile phase (MP) A consisted of 5 mM ammonium acetate in water:isopropanol (98:2, v/v); and MP B consisted of methanol:isopropanol (98:2, v/v). The MP gradient was as follows: after injection, initial conditions with MP A at 90% were held for 0.5 min, decreased to 5% in 3.5 min and held constant for 5 min, returning to initial conditions for another 3 min of re-equilibration time. Retention times for the target analytes were: pterostilbene, 6.3 min; pterostilbene glucuronide, 5.4 min; and pterostilbene sulfate, 5.5 min. Total run time was 12 min.
A turbo ion spray interface was used as the ion source operating in negative ion mode. Acquisition was performed in multiple reaction monitoring mode using the following ions: pterostilbene, 255.1 → 197.5; pterostilbene glucuronide, 431.1 → 255.1; and pterostilbene sulfate, 335.1 → 255.1. Ion spray voltage was −3,000 V; ion source temperature was 450°C; and collision energy was −30, −35, or 45 V.

The selectivity of the method was assessed by analyzing plasma extracts from different lots for the presence of analytical interferences and comparing the results to those obtained from spiking the blank plasma sources with analytes at the lower limit of quantitation (LLOQ; 5 ng/mL). Linearity was assessed using external standard method (pterostilbene) and up to eight calibrators with analyte concentrations in the 5–1,000 ng/mL range. The curves were built from peak areas using least-squares linear regression with (1/x) weighting factor. The weighting factor was chosen based on goodness-of-fit criteria including coefficient of determination (r2), the back-calculated concentration of individual calibrators, and minimizing intercept value. Precision and accuracy of the method were determined from QC sample results. Within-run precision and accuracy were assessed from the results from a single day, while between-run precision and accuracy were determined from the results from multiple runs.

No significant peaks interfering with the quantitation of the agents were detected in the chromatograms of blank plasma. Calibration curves for both agents were linear from 5 to 1,000 ng/mL. The r2values were greater than 0.995. The back-calculated concentration of individual calibrators used to determine the calibration curve ranged from 90 to 100% of the true value. The method’s precision (CV%) was less than 10% and within-run accuracy ranged from 92 to 109% for both agents.