NanoPSA is a blend of NanoStilbene™ and Broccoli Sprout Extract (BSE) providing 74mg of BSE and 125mg of our patented NanoStilbene, a proprietary formulation of nanoparticle pterostilbene.
BSE contains the compound known as glucoraphanin. Glucoraphanin converts into a new compound in the intestine, known as sulforaphane (SFN). SFN  promotes Phase II detox processes to assist in the removal of toxins body.
Because we rely upon the gut for of BSE into SFN we added  NanoStilbene which causes in microbiota  and improved metabolic function. 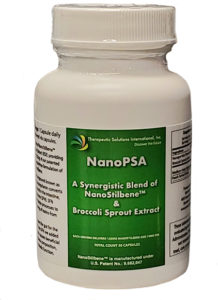 Antioxidants protect the cells in our body from damage that is cause caused by excessive oxidative stress, in the form of free radicals, defined as unstable compounds missing an electron [1]. Documented evidence shows the most available source of electrons is our healthy cells. Given sufficient time and the persistent exposure of our healthy cell walls to free radicals eventually breaks them down, leading to a reduction in good health.

Antioxidants are self-sacrificing electron donors and function by giving free radicals another source of electrons instead of healthy cell walls. When antioxidants donate their electrons to free radicals it results in the neutralization of them which prevents them from appropriating any more electrons leading to even more damage. Antioxidants can help prevent or minimize the build-up of damage over time.

Free radical damage has been closely linked with inflammation because the body interprets oxidative damage as an overall threat [2]. We know what the result is, a cycle of oxidation: damage – immune cells – more damage. Increasing antioxidant potential in the body provides a solution by helping to prevent a lot of oxidative damage in the first place.

By eating foods that contain antioxidants like Vitamins C & E [3,4] we can generally remove free radicals before they start causing damage and powerful antioxidants like pterostilbene can be very beneficial [5].

There are also what we know as the indirect antioxidants and enzymes produced by our bodies like glutathione and superoxide dismutase [6,7,8].

This leads to a system in place known as Phase II detoxification that allows for increases of antioxidant enzymes by consuming glucoraphanin, a potent activator of Phase II detox [9,10,11].

Glucoraphanin was first discovered in the 1990’s [12,13]. Like pterostilbene and resveratrol, glucoraphanin works in a plant’s defense system in a similar way [14,15,16].

Glucoraphanin, being a glucosinolate that can be found in broccoli is converted into its bioactive form called sulforaphane.

The conversion into sulforaphane is caused by an enzyme called myrosinase. In the absence of myrosinase its very interesting that the body’s gut microflora will perform the conversion [17].

Glucoraphanin then is the precursor to sulforaphane [18,19]. Glucoraphanin is one of a few molecules known as isothiocyanates, existing mainly in cruciferous vegetables like broccoli.

Sulforaphane appears to act on the prototypical anti-inflammatory mechanism of inhibiting NFkB translocation, a mechanism which disrupts inflammatory signals to the nucleus [20].

In a study using Macrophages LPS-induced inflammation (Lipopolysaccharide-Induced Inflammation ) was decreased with sulforaphane by inhibiting NO release, TNF-α release, and PGE2 production [20].

The mechanism of sulforaphane inhibiting NF-kB translocation does not appear to be via directly influencing the inhibitory unit IκB-β [21,22]) but instead reduces the production of IκB-α. Sulforaphane may also directly prevent NF-kB from forming complexes when in the nucleus[20].

Anti-inflammatory effects of Sulforaphane are mediated by preventing NF-kB from translocating to the nucleus, which disrupts pro-inflammatory signals from acting in the nucleus.

In non-immune cells not stimulated with LPS, thioredoxin can be increased secondary to activation of the anti-oxidant response element (ARE) from Nrf2 activation; induction of thioredoxin has been seen with injections of 0.5mg/kg sulforaphane (physiologically relevant concentrations) [24]. Thioredoxin reductase is also a molecular target of pyrroloquinoline quinone, but interactions with Sulforaphane are unknown.

Some cross-over from Sulforaphane’s antioxidant actions may influence inflammatory properties due to some proteins that act in both pathways.

For example, in rheumatoid arthritis, characterized by inflammation and rapidly proliferating synoviocytes, (which is commonly seen as a treatment target [25] sulforaphane appears to be able to, in vitro in cultured synoviocytes, suppress TNF-α induced inflammation and proliferation when preincubated (secondary to activating Nrf2) and induce apoptosis in cultures already stimulated with TNF-α [26].

In cancer, sulforaphane appears to act as a Histone Deacetylase inhibitor, a mechanism that can induce expression of p21Cip1/Waf1 via deacetylating histones H3 and H4 [27,28]. The potency of sulforaphane at 15uM appears to be as effective as the standard drug trichostatin A at 100ng/mL, with additive benefits when both were coincubated;[28] as they do not influence Histone Deacetylase protein content nor β-catenin (content or translocation), it appears they work by depressing the TOPflash promoter resulting in up to a doubling of acetylation as measured by histone H3 and H4 [28]. Sulforaphane itself does not work in this regard, but appears to work via metabolites, with sulforaphane-cysteine and sulforaphane-NAC being effective in a concentration dependent manner [28].

Oral administration of Sulforaphane can reach the prostate at concentrations between 0.07-0.1mg/g wet weight between 2-6 hours after ingestion of (human dose equivalent extrapolated from mice) 1.55-6.2mg/kg; although in a manner that does not correlate with serum values [29].

Sulforaphane is able to release free hydrogen sulfide (H2S) in prostatic cancer cells, and 5-50μM sulforaphane causes concentration dependent H2S release (via cystathionine γ-lyase) and reductions in cellular viability in a manner that is partially blocked by scavenging H2S [30]. H2S, as well as sulforaphane, activated all three major MAPKs (ERK, JNK, p38) and inhibiting the activation of these MAPKs blocked the effects of H2S [30].

Histone deacetylase 6 (HDAC6) is a protein that appears to disrupt a cytoplasmic chaperone called HSP90,[31] and this disruption dysregulates the androgen receptor and attenuates signaling through the androgen receptor at 10-20μM concentration;[32] this is mediated via HSP90 hyperacetylation from inhibiting HDAC6 [33]. Transcriptional activity was not ablated with sulforaphane, indicating that inhibition came post-transcription and was thought to be through a reduction in Androgen Receptor content in both LNCaP and VCaP prostatic cancer cell lines,[32] as well as BPH-1 and PC-3 cells[34] most of which mimick the elevation of androgen receptor during prostate cancer [35].

Interestingly, there is a synthetic analogue of Sulforaphane called D,L-Sulforaphane that is currently being investigated for its usage against prostate cancers; which appears to be promising [36,37].

Possibly secondary to these mechanisms, Sulforaphane has been found to inhibit cancerous cell growth and induce apoptosis of cancer cells in vitro [38].

One study assessing possible nutrient interactions noted, with curcumin and EGCG form green tea catechins tested in LNCaP cells alongside Sulforaphane, that pairing either of two nutraceuticals with Sulforaphane showed efficacy in reducing cell proliferation relative to control and combining all three trended to be more significant [39].

In response to oral sulforaphane, kidney concentrations of sulforaphane appear to range from 0.06-0.07mg/g wet weight between 4-6 hours after ingestion; suggesting that oral supplementation can load in the kidneys [40] and appears to be an effective kidney protective compound during periods of toxin or physical stressors to the kidneys, with protection only existing during periods of Sulforaphane consumption.

Sulforaphane, at an oral dose of 0.5mg/kg bodyweight in mice for 3 months, was able to significantly attenuate the progression of renal disease (as assessed by kidney weight the albumin:creatinine ratio, normalizing the difference between diabetic and control mice by 41% and 37.7% respectively) in diabetic mice only when it was being consumed; with benefits ceasing upon cessation of Sulforaphane [41]. These effects were mediated by Nrf2 activation preventing oxidative and inflammatory stressors,[41] which also appears to underlie protection of the kidneys from organotoxins (with similar potency as curcumin),[42] unilateral ureteral obstruction,[43] diabetic nephropathy,[41,44] ischemia/reperfusion,[45] and cisplatin [46].

In the liver there is one study using streptozotocin to induce type 1 diabetes noted that sulforaphane at 0.05-0.5mg/kg of the diet prior to injections exacerbated some damage to the liver, increasing AST (but not ALT) and total cholesterol (but not HDL-C nor hepatic Triglycerides; serum TGs was beneficially reduced to control levels) [47].

Sulforaphane appears to be synergistic with Curcumin in regard to anti-inflammatory actions in Macrophages, as the level of anti-inflammatory effects exerted by either alone is matched by their combination when concentrations are dropped to 40% [48]. This synergism is not at the level of proinflammatory mRNA induction, but rather at the level of inducing antioxidative protein mRNA of HO-1 and NQO1 [48]. One other study measuring apoptosis in pancreatic cancer cells (PaCa-2 and Panc-1) in vitro noted synergism with Sulforaphane, Curcumin, and Aspirin when at 5uM, 2.5uM, and 25uM; respectively.[49]

Phenethyl Isothiocyanate (PEITC) is another compound found in Brassica vegetables alongside Diindolylmethane and Sulforaphane (SFN) and appears to be synergistic with the latter. In a study on cultured macrophages (RAW 264.7, immune cells) it was found that PEITC was equally effective as curcumin in isolation on inhibiting inflammation from the macrophage (measured by Nitric Oxide; IC80 of 5uM each) while SFN was more potent with an IC80 of 1uM; the synergism between PEITC and SFN at these concentrations was more potent than the synergism between SFN and Curcumin, and the combination with 40% of the concentration (2uM PEITC and 0.4uM SFN) was as effective as either alone at higher concentrations [48].

Glucoraphanin gets hydrolyzed by the myrosinase enzyme and then produces one of two metabolites, either 5-methylsulfinylpentane nitrile (via the ESP enzyme) or sulforaphane. While heating at low temperatures can enhance sulforaphane production from inactivating ESP [50] higher temperatures also inhibit myrosinase and prevent either metabolite from being formed.[51] Due to this balancing act (of which practical cooking techniques tend to denature myrosinase), the addition of mustard to the cooking of broccoli has been investigated as mustard (sinapsis alba) has a form of myrosinase that is much more heat resistant[52,53] whereas broccoli tends to have a heat sensitive form.[53,54] Due to this, when mustard seed powder is mixed with broccoli powder (1-2%; or 12-25mg per 250mg broccoli powder) the sulforaphane availability is increased when cooked, and the losses that would normally occur beyond 60°C instead occur above 90°C and cooking at a temperature that normally abolishes sulforaphane formation (8-12 minutes of boiling sous vide) has three-fold more sulforaphane when it is mixed with mustard seed [55].

The mixture of mustard seeds alongside broccoli powder during cooking can increase sulforaphane bioavailability since mustard has a more heat-resistant form of the enzyme that makes sulforaphane. That being said, the study mixed powders of both foods rather than cooking with the whole food products; this information may not apply to placing mustard seeds alongside broccoli florets.